Sniper: What goals have you set yourself at the moment?

Browne: “I used to set myself the goal of getting an international cap but these days it’s to win a ranking tournament. I got to the final of the Irish Open last season but I lost 4-1 to TJ Dowling.”

“There were two games that went to the pink, so it was close, but I think it just came down to experience and that.”

Sniper: You’ve improved a lot as a player in the last couple of years. What changes have you made to help your game?

Browne: “I started to relax and think that there is more to things in life than snooker. It’s always easier to perform when you’re relaxed.”

“When you play snooker you have to have a clear mind and try to shut out all the other distractions. If something has happened off the table and you go into the match thinking about it, then you’ve no chance.

“I practice a lot, almost every evening or every second evening for around three hours. When you’re playing then in the morning your mind isn’t used to playing at that time, which can be difficult.”

Sniper: You’ve changed your cue action a few times with Irish national coach PJ Nolan. What changes did you make?

Browne: “I got a new cue two years ago and I couldn’t pot a long ball with it. Then we realised that it wasn’t to the spec that I asked for as it was too light, so I got a new cue this year again and I love it now.”

“I wouldn’t say that any area is perfect overall but I’d say I’m good in all areas of the game and my safety is my strongest.” 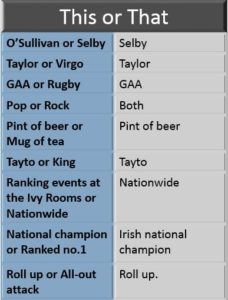 Sniper: Tell us about your most successful moment in snooker.

Browne: “I’d say getting to that senior ranking final last season. I played John O’Sullivan, Johnny Farrell, and Rodney Goggins – who I’ve only beaten once in ten years. Then, I beat Robbie Murphy in the semis.”

“When I’ve represented Ireland, it’s definitely been the trip to Serbia for the European Team Championship. It was my international debut in the seniors. I hadn’t really done much in the rankings at the time, I was number 13 and I got a phone call to go and I was all over it.

“The way I performed for the first time, I absolutely flew. I only lost one match and I was very unlucky as well. I lost 8-6 in the team event with Ryan Cronin and Jason Devaney in the quarter-finals to Poland.

“Mateusz Baranowski fluked two black balls against me to win two frames and we ended up losing by only two frames. We beat Israel 8-1 in the last 16 and they were one of the favourites.”

Sniper: Who is your most difficult opponent, and why?

Browne: “All the top players are all very hard to beat, they all give you nothing. But for me, going through the years, Rodney Goggins has been the one.”

“I’d say he beat me around 20 times in a row before I finally beat him. I had a few close matches against him and one time I lost to him in the final of the Finbarr Ruane Snr Memorial Cup final. I had three 50-plus breaks but he beat me 3-0, winning each frame on the black.

“He’s been around so long and he has achieved so much, he just knows how to win when he’s playing good or bad. If you give him an inch, he’ll take a mile. It was such a weight off my shoulders to finally get one over on him.”

Sniper: Favourite professional player, and why?

Browne: “Stephen Hendry. I loved the way he played the game. He was fearless, he had so much self belief when his back was against the wall.”

“He always came out fighting and he always dug out a result. He was relentless and if he was in his pomp now, with so many tournaments on the calendar, I reckon he possibly could have trebled his centuries tally. He was ridiculous and so mentally strong.”

Sniper: Would you have any snooker-related pet peeves?

Browne: “Well, that’d be telling because they’ll do it against me then going forward!”

“No, in all seriousness it’s just the usual things. People talking is one. If players are having a full-blown conversation in the middle of the game it’s bad manners. You should respect your opponent.

“I try not to do anything to upset people, I’d like to think that I’m respectful around the table and towards my opponent, so I’d expect to be treated the same.”

Sniper: What’s your opinion on the current state of Irish snooker?

Browne: “We’ve definitely underachieved as a nation in snooker in the pro ranks in recent years, for the players we’ve had and the talent we’ve had.”

“McCrudden was kind of like Ireland’s amateur Ronnie O’Sullivan, he was that good and amazing to watch when he was on his game.”

Sniper: Who could have gone far but maybe didn’t achieve what he could have?

Browne: “Davy Morris, by a country mile. He was streets above everyone else.”

“I remember playing him when he was about 14 and for a boy that age he was so mature. He had everything – a great safety game, he was a great scorer, and most of all he was very calm.

“You never really could tell if he was winning or losing and he always had the same demeanour about him. I’d say if he had gone over to England when he was 16 or 17 and learned the trade against all the top lads over there, I reckon he’d easily be top 20 in the world now.

“I’m a firm believer that if you want to go pro, you can’t stay in Ireland. You have to go to England, rent a room, and live on pot noodles if you have to for three years. It’s what Ken Doherty did to learn the trade.”

Sniper: What changes could be made to the Irish system?

Browne: “I think if you’re outside the top 16 in the rankings, you shouldn’t be picked to go on to the international tournaments, especially at the senior level, because you haven’t really justified yourself enough to warrant a selection. Even at 16, you’re pushing it.”

“As well as that, I think there are too many junior tournaments. The junior lads should be made to play in the senior tournaments and the intermediates. I think it’s the only way the younger players are going to learn and develop their game.

“When Mick Judge was 12 or 13, he was playing in the senior events. He was getting pumped but he said he couldn’t wait for the next one and he wanted to practice so hard.

“You can see it with Aaron Hill and Ross Bulman now, they’re entering the events and they are holding their own with the seniors. They are only 14 or 15 and haven’t won a tournament yet but they are knocking on the door already.”

Sniper: You play in Terry Rogers Snooker Club and I’ve heard the conditions are excellent these days. How do you rate them?

Browne: “It’s phenomenal. There’s eight tables, two of which are Star tables. One of them is brand new, it was put in there within the last month and it’s amazing – it’s like playing on ice.”

“I think we’re spoiled in Terry Rogers at the moment because we’ve got those Star tables, we’ve a Riley’s table that was always there and there’s a new one of those in too, and there’s a lovely club table just inside the door of the club.

“There’s heaters on those five tables. I 100% think that the club should be getting more tournaments, definitely in the Intermediates.

“It would probably be better if there were two more tables because you might have to play events over three days but you wouldn’t have anyone giving out about conditions or anything like that.”

Keep an eye out for the next “Sniper Shot”, coming later in the season.