The 2012 World Seniors Championship takes place this weekend in Portsmouth as 16 of the best old-timers attempt to etch their name on the trophy. While there have been numerous senior events staged in the past, it wasn’t until 2010 that Joe Johnson helped to bring back the notion of[Read More…]

Stephen Maguire became the first player into the semi-finals of the Gdynia Open after a brace of 4-1 victories sealed his last four berth in Poland. Maguire, who has performed very well in the PTC series since its introduction in 2010, winning twice alongside three runners-up spots, looked in good[Read More…] 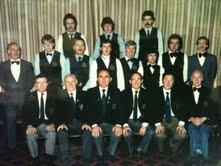 By Fin Ruane The Republic of Ireland snooker team this week won the 2012 Home Internationals. This brings to four the number of times Ireland has now won the Prince Of Wales Shield following the successes in 1993, 2000 and 2001. The series that is held every Autumn has always[Read More…]

The three Players Tour Championship winners from this season so far all booked their seats on the flight to Poland today for the Gdynia Open in October. Stephen Maguire and Martin Gould, champions of the two UK PTCs staged so far, and inaugural Asian PTC winner Stuart Bingham all came[Read More…]

Morris Moves Closer to the Crucible

David Morris has won his third qualifying match for the World Championship after a hard-fought 10-7 triumph over former semi-finalist Alan McManus. Fan favourite Jimmy White, though, failed in his bid to return to the Crucible as he was dumped for the second year in a row by China’s Liu[Read More…]

Judd Trump withstood a spirited fight back from Jimmy White to prevail 5-3 in the last 32 of the China Open in Beijing. The UK champion raced into a 3-0 lead as his opponent failed to settled, gifting Trump two frames in the opening bout of exchanges either side of[Read More…]

Stephen Hendry beat Martin Gould 5-4 on the final black after a dramatic deciding frame in the last 32 of the China Open in Beijing. Hendry took the lead in the encounter with a superb 135 century break and could have extended his lead in each of the next two[Read More…]

The Chinese contingent suffered a horrible day in the final qualifying round for their flagship event, the China Open, yesterday as all four remaining players were dumped out in Sheffield. Irishman Fergal O’Brien edged Li Yan 5-4 to make it back-to-back successes in the qualifying cubicles having recently reached the[Read More…]

Ken Cruises Through in Welsh Qualifiers

Ken Doherty advanced to the final round of qualifying for the Welsh Open after a comprehensive 4-0 drubbing of Rod Lawler in Sheffield. The Irishman dropped outside the top 32 in the world rankings at the last cut-off point and he’ll be desperate to regain his place before the final[Read More…]

Ken Doherty came from 4-0 behind to beat teenager Sam Craigie in outstanding fashion and progress to the final stage of the German Masters next February. 17 year-old Craigie showed no fear in going into an apparently insurmountable lead at the interval but felt the pressure when the former world[Read More…]