Reigning world ladies snooker champion Ng On Yee has qualified to take up a place in the qualifying rounds of this year’s Betfred World Snooker Championship. 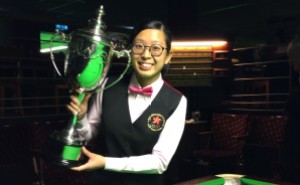 On Yee, 25, from Hong Kong, became the first non-British winner of the World Ladies Snooker Championship last year and is now set to play in the sport’s biggest event at Ponds Forge International Centre in Sheffield in April. She will need to win three qualifying matches to reach the televised stages at the Crucible Theatre.

On Yee, who ended the ten-year reign of Reanne Evans in the semi-finals of the ladies event, is coached by Terry Griffiths’ son Wayne and also went on to win the LITEtask UK Ladies Championship for a second time last September.

“I am very excited by the prospect of competing in the best competition in the world,” said On Yee. “It will be a great opportunity to learn more about the differences between the ladies game and the professional tour.

“Playing at the very top level is a dream come true for me. I am excited to see new doors being opened in snooker, with more opportunities for ladies to participate in different competitions.

“After such a good year of results in 2015, I want to build on that and try to become even stronger in 2016. This added opportunity to compete with and learn from some of the best players in the world is a chance I am very grateful for. I will work very hard to represent myself, Hong Kong and ladies snooker in the best possible way. My goal will be to make the most of this opportunity as I look to improve in the future.”

“On Yee’s success at the 2015 World Ladies Championship was an incredible achievement and she thoroughly deserves the opportunity to now play in the World Championship in Sheffield,” said Jason Ferguson, Chairman of the WPBSA.

“Snooker is a sport with no boundaries and as the first non-British winner of the World Ladies Championship, On Yee is a tremendous example to all who aspire to compete in our sport at the highest level.

“Following the recent restructure of the WLBS we are hugely excited by the future of the ladies game and looking forward to continuing its growth globally as we continue to promote the core values of the Olympic movement.”

The qualifiers for the 2016 Betfred World Championship will run from 6-13 April 2016, with the draw to be made after the seeding revision following the conclusion of the China Open.

Creator of SnookerHQ and a journalism graduate, David has been actively reporting on snooker since 2011. He has been published in national publications and has appeared on BBC World News and on talkSPORT radio as an analyst.

World Rankings after the Tour Championship – won by Neil Robertson.