Stephen Maguire is one match away from automatic qualification for the World Championship after beating Dominic Dale 5-1 in the China Open on Thursday. 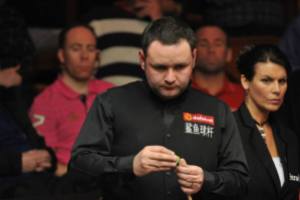 The Scot booked his place in the quarter-final with runs of 86 and 51 to set up a titanic tussle against Alfie Burden on Friday in Beijing.

Win, and the 35 year-old guarantees his place at the Crucible at the expense of Ding Junhui.

Lose, and he’ll be forced to contest the dreaded qualifiers at Ponds Forge where a further three victories will be necessary in order to reach Sheffield’s theatre of dreams.

David Gilbert and Graeme Dott’s defeats in the last 16 ensured that only Maguire can now dislodge Ding from the elite bracket.

Gilbert went down 5-3 to John Higgins in a repeat of the International Championship final while Dott, the 2007 champion, succumbed to a heavy 5-1 loss at the hands of Noppon Saengkham – the Thai embarking on a maiden run to the last eight of a ranking event.

For Ding, his hopes now lie with Burden, who also reached the quarter-final of a ranking event for the first time following a strong 5-1 triumph over Rory McLeod.

Burden represents a difficult challenge for Maguire but it goes without saying that the 2008 China Open winner will be pleased to be facing a player ranked outside the top 64 rather than the likes of a Robertson or Trump.

However, he’ll surely be feeling the pressure so it’ll be interesting to see how Burden copes with his own unique experience of featuring at the business end of an event of stature such as this one.

Trump’s step up into the big-time began five years ago at this very tournament when he stormed to the title before surging to the final of the World Championship with his own brand of “naughty” snooker.

The Englishman will face countryman Mark King for a semi-final berth, the latter enjoying a very solid campaign overall already and prolonging it with a 5-0 whitewash win over Martin O’Donnell.

Finally, Stuart Bingham and Ricky Walden set up a clash against each other following contrasting victories on day four.

World champion Bingham was generally in control as he saw off Rod Lawler 5-2 but Walden needed a decider which went all the way down to the final blue in order to dispatch of the final home hope, Tian Pengfei.

Like in the Players Championship final against Mark Allen last Sunday, Walden appeared in control when he opened up a 3-1 interval advantage playing nice snooker.

But his form deserted him and Tian grew in confidence to force a final frame shoot-out.

The Chinese had multiple chances but couldn’t handle the pressure as he also was seeking his first shot at a quarter-final, so the experienced Walden duly punished him.

Friday will see the four last eight clashes take place where all eyes will surely be focused on the Maguire and Burden affair.

Creator of SnookerHQ and a journalism graduate, David has been actively reporting on snooker since 2011. He has been published in national publications and has appeared on BBC World News and on talkSPORT radio as an analyst.

World Rankings after the Tour Championship – won by Neil Robertson.