Mark Selby and Ding Junhui tussled in a thrilling third session which left their World Championship semi-final finely poised at 12-12 in Sheffield. 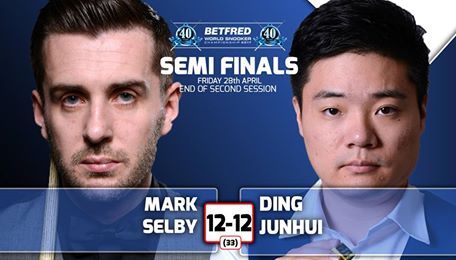 The pair goes into Saturday’s final session each requiring five frames in order to reach the final at the Crucible for a second successive season.

Defending champion Selby, who beat Ding in the showdown for global glory twelve months ago, appeared to take a stranglehold on the contest when he reversed a 5-3 first session deficit into a 9-7 advantage following the second bout of play.

When the world number one compiled an excellent 128 at the beginning of the third session to pull three frames clear for the first time in the match, there were concerns that Ding’s challenge could fade for another year.

Yet, China’s top player maintained his newly found composure, possibly as a result of working with renowned coach Terry Griffiths over the course of the last couple of years, as he refused to give in when the going was getting tough.

The 30 year-old twice pulled back to within one frame of Selby but kept desperately falling short of evening the scores.

The 22nd frame could have especially hurt, with Selby producing a vintage clearance to deny Ding levelling on the black, which at 12-10 guaranteed that the 33-year old definitely wouldn’t be behind after the second day’s play.

However, neither would the world number one be ahead, because a resolved Ding produced unreal snooker in the final two frames, constructing consecutive century breaks of 117 and 128 to make it 12-12.

It ensured parity between the players with effectively just a best of nine left to play, and it’s increasingly difficult to pick a favourite between the duo.

Selby has the ability to grind out triumphs regardless of whether he’s in form, out of form, ahead, or behind – so whatever the scoreline on Saturday it would be foolish to ever write him off.

Ding, on the other hand, has an aura about him this year in which everything may be aligning properly for him to finally emerge from Sheffield with a maiden world crown.

The 12-time ranking event winner will have to prolong the kind of form that has got him to this point, with previous impressive victories over countryman Liang Wenbo and five-time world champion Ronnie O’Sullivan to his credit, but he has offered every sign the possibility is there for that to materialise.

Either way, it promises to be a hugely dramatic finale with two of the world’s best players from the current generation – or any generation – set for a monumental battle for the first berth in the final.

Meanwhile, the second semi-final has reached its halfway stage with John Higgins 10-6 in front of Barry Hawkins.

Four-time champion Higgins won the opening session on Thursday 5-3 and repeated the trick on Friday afternoon to gain a strong foothold in the tie.

There was controversy in the ninth frame when Hawkins pulled to within one frame of the Scot as a direct result of a poorly misplaced ball following a foul.

Higgins, eyes bulging and face volcanic in colour, looked like he was about to explode with rage but managed to rein in his emotions to win the next two frames and move to 7-4.

The subsequent four frames were shared, with Hawkins knocking in a wonderful 115 en route, but the Englishman couldn’t salvage the session by taking a tense last as Higgins held on to establish the four-frame overnight cushion.

With the experience that the 41 year-old possesses, it’s hard to envisage the “Wizard of Wishaw” failing to go on now and reach what would be a sixth World Championship final.

Hawkins must win the third session as a bare minimum if he has any hope of a late revival.

By the end of Saturday, we’ll have our two finalists as the marathon quest for the £375,000 champion’s cheque draws ever nearer its climax.