Sniper: What are your goals for the rest of this season?

Judge: I’d like to win the Seniors Masters at the Crucible in Sheffield in April and also the Irish National Championship will be the month after so it’s definitely something that I’d like to win again.

Sniper: Tell us about some of your successful moments in snooker.

Judge: In 2001, I beat Jimmy White to qualify for the World Snooker Championship at the Crucible. It was my first time qualifying and I beat Jimmy 10-7 in the final qualifying round. Then at the venue, I beat John Parrott in the first round, so that was pretty special.

Going a bit further back, I won my first Irish ranking event when I was 15 years-old and I think that made me the youngest winner of a senior ranking event at the time, beating Paddy Browne’s record. I think Davy Morris has beaten me since. I’m not sure but I know I was the youngest at the time to win one because it was in the paper and all, so it was a good achievement. 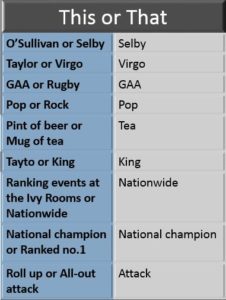 Sniper: What would count as your worst defeat in the game?

Judge: That would have to be the 2007 World Championship when I lost 10-9 to Marco Fu in the final round of qualifying for Sheffield. It was the year when a lot of the Irish boys qualified. Ken Doherty, Fergal O’Brien, and Joe Delaney were all there, as well as Joe Swail and it was also Mark Allen’s first time there too.

Sniper: Who would you consider to be the most difficult opponent you’ve faced?

Judge: I’d have to say Peter Ebdon. I lost 9-4 to him in the UK Championship one year and I played well but he never missed a ball. Then in the first round of the World Championship in 2002, he beat me 10-4. Again, I played quite well but he just didn’t miss a ball and that was the year he went on to win it at the Crucible.

Sniper: Do you have a favourite player?

Judge: Joe Swail. He’s an absolute legend on and off the table and he’s still hanging in there even though he’s an old lad now.

Sniper: What’s your opinion on the current state of Irish snooker?

Judge: I think the standard is very high in the Irish amateur scene when we get good conditions. There are a few good young players coming along now too so if we could get consistently good conditions – like providing new cloths on the tables more often and things like that – I think it would help.

Keep an eye out for the next “Sniper Shot”, featuring John Sutton.