A lot of focus this week is on the ongoing Players Championship but also taking place from Wednesday will be the World Seniors Championship in Scunthorpe.

Stephen Hendry will be the star attraction in a field of 16 players all gunning for global glory in the over 40s category.

The World Seniors Championship has been running annually for almost a decade ever since former world champion Joe Johnson helped to resurrect it in 2010.

However, this will be the first year that the tournament will be contested as part of the new World Seniors Tour, which has already proven to be a success in its inaugural campaign.

Jimmy White captured the UK Seniors Championship late last year before Steve Davis rekindled his dominance at Goffs in County Kildare with victory in the Seniors Irish Masters in January.

Next month, a prestigious seniors version of the Masters will take place at none other than the Crucible itself but it’s the World Seniors Championship that will naturally still garner the most attention and the greatest prize.

This year’s edition saw qualifying events staged across the UK, Ireland, and as far afield as China as promoter Jason Francis continues his impressive development of the legends circuit.

Many will be eager to see how Hendry, who has hinted of a potential autobiography that’s in the pipeline for later this year, gets on as he attempts to claim a maiden title since retiring from the sport as a professional just shy of six years ago.

A triumph on Saturday, in which the winner gets £10,000 and 10,000 crypto coins from sponsor Assetereum, would send Hendry through to the World Snooker Championship qualifiers in Sheffield, with just three additional victories standing in his way of a dream return to his old stomping ground at the Crucible.

The 49 year-old couldn’t have really been handed with a tougher opening tie, though, with England’s Jonathan Bagley his opponent in the last 16.

Bagley has been a permanent fixture in these events for years and was the runner-up to Davis in the Seniors Irish Masters a couple of months ago.

Hendry’s fellow former world champions John Parrott, Cliff Thorburn, Dennis Taylor, and Joe Johnson, as well as former world number two Tony Knowles, are the other standout competitors in the draw who will pull in the fans.

Second seed Parrott, who was the runner-up to Peter Lines twelve months ago, takes on the only Asian in the draw – Chinese qualifier Cao Kaisheng.

Unfortunately, crowd-pleasers Willie Thorne and Tony Drago were forced to withdraw in the last week and have been replaced by Gary Filtness and Simon Dent respectively.

This gives Barry Pinches and Patrick Wallace, who were originally going to be Thorne and Drago’s opponents, a potential opportunity to advance further and the pair, not very long off the Main Tour themselves, must actually be considered as potential threats for the title.

The format follows the same guidelines as the previous events staged this season with matches either the best of five or seven frames long and a re-spotted black acting as the decider if the scores are even going into the last frame.

It promises to be another entertaining chapter to the World Seniors Tour and it’ll be intriguing as ever to see who emerges on top with the trophy held aloft. 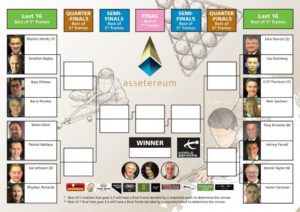