Sniper: What are your current goals in the game?

Sutton: “I want to play to a level that I know I’m capable of. I was out of the game for a while but the standard I was producing in practice would probably win me a lot of matches going forward.”

Sniper: What would represent your most successful moment playing snooker?

Sutton: “I think getting to the final of the first ever Snookerbacker Classic was a high point for me when I came through the Irish qualifier in CrossGuns and then reached the final in Gloucester.”

“I also had a very successful two weeks in Q School in 2014 when I got to the final of the first event but just missed out against Craig Steadman. I beat top quality opponents on great conditions and I think I had five tons during that Q School.” 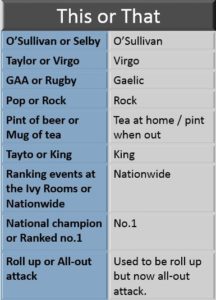 Sniper: How about your worst defeat? What was the most painful?

Sutton: “Losing to Robert Murphy 6-4 in the semi-finals of the Irish Championship in 2015 was tough to take. I was playing so well then and I really left it behind that year.”

Sniper: Who would you consider to be your most difficult opponent?

Sutton: “I’d have to say Brendan O’Donoghue. Even though I have overcome him a couple of times, he’s just so hard to beat as he has all the shots. He can tie you up in knots tactically or finish you off with high breaks.”

Sniper: What about your favourite professional player?

Sutton: “It has to be Ronnie, simply for the way he plays the game. He is a joy to watch and his longevity at the top of the sport is amazing, with no sign that it’s going to get any worse any time soon.

“I believe he wins when he really wants to. I don’t generally like watching snooker but I will always want to watch him as long as he’s playing.”

Sniper: What do you think about the current state of the game in Ireland?

Sutton: “It’s very difficult for me to give a true and in-depth answer to the current state of Irish snooker as I’ve been out of the scene for a couple of years.”

“It does seem to me that the calendar is saturated with underage tournaments and the international waistcoat has lost a little bit of its prestige due to there being so many events at the moment.

“The fact that the council took on board a few ideas relating to how the senior events finish – so that they don’t clash with the masters tournaments anymore – proved they are open to new ideas, which has to be a positive thing.

“Regarding the international trips, I strongly believe that moving so far down the rankings to simply just have some representation at these events is pretty pointless.

“If the top-ranked players can’t go for some reason, just don’t send anyone and instead put the money that is saved back into the Irish game.”

Keep an eye out for the next “Sniper Shot” later this year.