Following the conclusion of the Six Red World Championship, snooker returns to its more traditional 15-red format next week with the revamped Shanghai Masters in China. 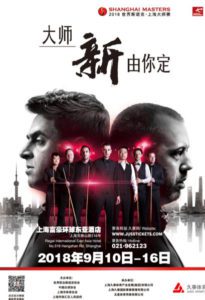 After a decade as one of the most popular and well-supported ranking events on the calendar, the decision was made to transform the Shanghai Masters into a lucrative invitational.

While there has been some criticism about this, with a few highlighting the fact that it only adds another tournament to the schedule in which the elite are able to compete in for huge sums of money, in truth China has been crying out for a prestigious invitational like this for years.

Indeed, it made perfect sense for here to be chosen as the host city because, unlike the majority of other venues and competitions staged in the snooker mad country, Shanghai actually tends to sustain big crowds and a nice atmosphere.

Like the Masters at the Alexandra Palace in London, the top 16 in the world rankings have been invited to take part in an event that carries a total prize fund of a whopping £725,000.

Eight additional players from the host nation, made up of the next four best Chinese competitors in the rankings and four amateurs from the region, will complete the impressive Shanghai Masters draw.

Ronnie O’Sullivan, who won its last staging as a ranking event in 2017, will make his long-anticipated first appearance of the campaign, awaiting the winner of the opening round fixture between Neil Robertson and one of the chosen wildcards.

There’ll be a significant amount of focus as ever on the “Rocket” to see what kind of form he is in after the best part of half a year away, and if he can replicate the kind of consistency that brought him a record-equalling five ranking event titles last term.

The in-form Kyren Wilson just missed out on a top eight seeding, thus is forced to play an extra round and has been tasked with a tough opener as he bids to make it a trio of consecutive tournament successes.

The Paul Hunter Classic and Six Red World Championship winner meets Liang Wenbo in the last 24 before a possible fixture against Judd Trump, the player Wilson beat in the final of the Shanghai Masters three years ago.

Meanwhile, all the heavy-hitters are in attendance, lining up together for the first time this season in what promises to be a fascinating week of action on the baize.

Underlining its newfound status as an event with prestige and China’s growing interest in the longer format, matches in the first three rounds will be played over the best of 11 frames before two-session best of 19 semi-finals and a title decider, in which £200,000 will be awarded to the champion, contested over 21 frames.

With the likes of world champion Mark Williams, world number one Mark Selby, John Higgins, and Ding Junhui also in the the Shanghai Masters draw, it’s difficult to decipher who will launch the biggest attack.

Wilson, Williams, and Robertson have been the best players so far this season, but to win this event the players will have to win a succession of encounters against their prime rivals.

This kind of set-up is tailor-made for O’Sullivan, who thrives under these kinds of conditions, having proven so on countless occasions in the past through his strong records in both the Masters and Champion of Champions – which both boast similar fields.

Whether the 42 year-old, who began working with SightRight coach Stephen Feeney over the summer, will be match fit or not remains to be seen.

Either way, it should be a tournament worth tuning in for.

Live coverage will be on Eurosport.