Mark Selby produced one of his best displays of the season to beat Jamie Jones and qualify for the German Masters on Thursday. 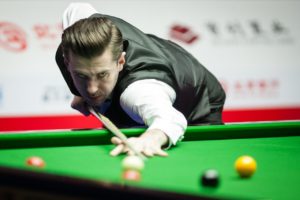 The world champion rounded off 2017 in style with a brace of centuries alongside further runs of 92 and 73 in overcoming the Welshman 5-2.

Selby has been the world number one in the rankings since he lifted the German Masters trophy at the Tempodrom in early 2015, so will have fond memories of returning to Berlin in the New Year.

Martin Gould, another former champion having tasted success a year later in 2016, also booked his spot in the last 32 courtesy of a hard-fought 5-4 triumph against Ireland’s Ken Doherty.

In a topsy-turvy affair that ebbed one way and then the other, Gould just about scrambled passed the veteran in a decider despite boasting only a solitary break above 50.

Shaun Murphy, Mark Allen, and Barry Hawkins all recorded 5-2 scorelines to seal a return to one of the most popular ranking tournaments on the calendar.

However, Jimmy White couldn’t improve on his impressive victory over Anthony McGill, falling in a 5-2 defeat to Yu Delu, while Mark Davis had the most comfortable outcome after the 45 year-old hammered Kildare’s Josh Boileau 5-0.

Elsewhere, Jimmy Robertson constructed centuries of 113 and 106 as he battled to a tight 5-4 triumph over Peter Lines.

Meanwhile, the first round of preliminaries reached its conclusion earlier in the day with some notable demises for the fancied competitors.

Former champion Ali Carter continued his slump in form with an unexpected 5-3 loss to Wang Yuchen while 2016 finalist Luca Brecel looked even more lacklustre as he bowed out to Hammad Miah 5-1.

Michael Holt was dumped out by the same margin by Mei Xiwen and Li Hang, one of the improved Chinese stars from this campaign, was edged 5-4 by Andrew Higginson.

Li fought back from 4-0 down to force a decider thanks to breaks of 72, 55, and a pair of 53s, but he could not complete the turnaround as the Englishman held on to advance to the next round.

There was no such trouble for Neil Robertson and Judd Trump, though, with the pair safely negotiating their opening hurdles while ex-world champions Peter Ebdon and Graeme Dott also moved through.

Ebdon was forced to rely on all of his battling qualities as he came from 4-2 down to deny Jak Jones in a final frame shoot out.

Among the others who will feature on Friday’s last day of action are Liang Wenbo, Joe Perry, Mark King, Thepchayai Un-Nooh, and Zhao Xintong.